Organisms are made up of many interacting structural and physiological parts that work together to perform life’s tasks, including feeding, evading predators, and reproducing. Understanding how these traits and their interactions affect organismal performance and fitness is the primary goal of functional morphology. Insights from functional studies are key to evolutionary biology in part because they identify phenotypic traits that are likely to be subjected to environmentally imposed natural selection. More generally, though, functional morphology research has established principles of functional organization that are relevant to a wide range of taxa and biological systems. Research in our lab examines the evolutionary consequences of two fundamental functional principles:

1) The relationship between form and function is often complex

2) Functional systems are integrated during performance of ecologically relevant tasks

Our work in this area focuses mainly on cranial morphology and feeding performance in teleost fishes, which is a an excellent model complex functional system. To capture prey in water, most fish (and most aquatic feeding vertebrates) generate suction by rapidly unfolding the skull to expand the mouth cavity. Unlike in humans and other mammals, the skulls of teleost fish have many movable bones, and movements of these parts are highly coordinated during mouth opening. For an illustration of just how kinetic teleost fish skulls are during feeding, play the video below. It shows a largemouth bass (Micropterus salmoides) feeding on a tethered shrimp filmed at 500 frames per second and slowed down 20x (which means that the strike is quite fast, taking place in about 0.2 seconds).

This type of complexity has several important consequences for evolution.

Many-to-one mapping of form to function can promote morphological diversity, even when functional output is conserved. In the Centrarchidae, two subclades have experienced little change among species in suction performance despite elevated rates of evolution in the morphological features that determine it (see Collar & Wainwright 2006, Evolution). This phenomenon occurs because many species' morphologies are nearly functionally equivalent .

Complexity in the functional basis of performance can also mitigate trade-offs. The force a fish can exert on its prey trades off with the reach of the flow because smaller mouths increase suction forces but affect water a shorter distance in front of the mouth. However, suction-induced force on the prey is determined by more than just mouth size; force is also affected by the suction pressure inside the oral cavity and the speed of mouth movement toward the prey (accomplished by swimming at the prey and/or protruding the jaws). In centrarchid fishes, combinations of all three functional components evolve to increase the ability to exert force while mitigating costs to the reach of the flow (see Holzman & Collar et al. 2011, American Naturalist). In this way, complexity can promote morphological, functional, and ecological diversification in the face of the many selective demands organisms experience.

Integration of functional systems can constrain diversification. An actively foraging fish must coordinate swimming performance, which is used to search for and chase down prey, and movements of the skull, which govern the force and speed of the strike. In the coral reef fish radiation Labridae (wrasses and parrotfishes), integration of these functional systems translates into correlated evolution between locomotor and feeding morphology. Evolutionary changes in cranial structures that increase strike speed are associated with changes in pectoral fin shape that increase swimming speed, and changes in the skull that increase the force of the strike are correlated with changes in fin shape that increase maneuverability (see Collar et al. 2008, Biology Letters).

As the fish's oral cavity expands, water rushes into the mouth to fill the increasing volume. This water flow exerts hydrodynamic forces on the prey that draw it toward the mouth. In fact, you can see the prey move into the mouth in the above video. The strength of the water flow can be measured as a drop in pressure, or suction, inside the oral cavity; the greater the pressure drop, the greater the forces on the prey. The morphological and functional basis for generating suction is considered to be a complex system because many bones and muscles have to work together in a highly coordinated manner to expand the mouth cavity.

1) Complexity in form and function

Complexity in the functional basis of suction performance is relevant to diversification because multiple, alternative morphological arrangements can produce the same suction pressure (this is called many-to-one mapping of form to function). The figure below illustrates this phenomenon in the Centrarchidae (North American freshwater teleosts including the sunfishes, black basses and crappies); six species exhibiting a narrow range of suction capacities span the entire range of variation in oral cavity morphology for all centrarchids (white area). 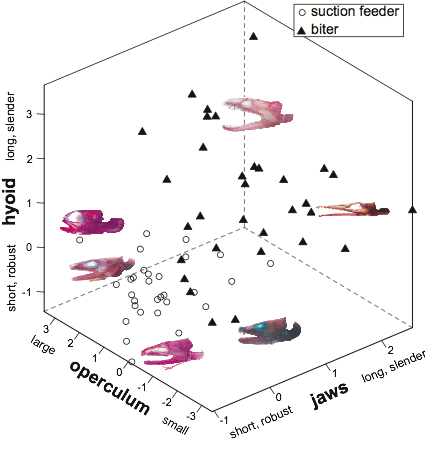